A while back, Laurie came to me and told me that she wanted to donate an organ; all of her intentions were good- she wanted to give back to the system that gave her dad a new liver.  I’ll be completely honest, I didn’t like hearing her say this, mainly because I knew that once Laurie puts her mind to something she does it.  So, in a sense, I knew that there was no convincing her otherwise and I was a little uncomfortable with that.  I, to this day, cannot pinpoint why I didn’t like hearing this from Laurie.  Was is jealousy, or selfishness? Why would I care whether or not Laurie wanted to become a living donor?  This is something I struggled with at the beginning of Laurie’s journey.  Was it a purely selfish reason?  I, at one point, justified this by telling myself that I didn’t want anything bad to happen to Laurie as a result of the surgery she would undergo. Obviously I would never want anything bad to happen to her, so why would this be a reason to hope she would forget about wanting to be a living donor?  I had seen, witnessed, and took part in almost everything that went on when her dad was going through his liver transplant and I didn’t see where she was coming from.  I mean, I was all about making sure I was signed up on the national organ donor registry and I was (am) all for getting people to sign up for this list. But I still didn’t understand what Laurie’s motivation was to be a living donor…

Time went on and there was no mention of organ donation and it seemed that it was a “fad” that had passed.  As time passed and Laurie became more and more involved in the transplant community with Transplant Village and Northwestern Memorial Hospital, I started to see how much Laurie was learning about the whole community and the people involved… this was becoming her passion.  I started to doubt my feelings about her being a living donor.  She came home with stories of people that had given their kidney or liver to a complete stranger… why am I only hearing about this kind of stuff now?  Why aren’t these stories shared more across media outlets?  Here I was, in my mid-thirties, really hearing about how common it was to be a living donor to a stranger.  What a brilliant idea! 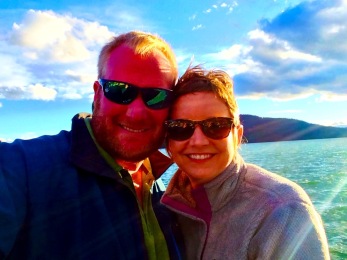 As a result of Laurie’s continued time and commitment to this cause, I started to learn more and more about the importance of living donors.  I found myself fascinated with why we, as a society, are afraid to change the way we think about this.  You hear the term “paradigm shift” thrown around a lot these days, usually used out of context and incorrectly.  Well, the cause that Laurie has dedicated her life to is a real paradigm shift.  We could virtually eliminate the need for people to die waiting for a kidney if we changed our thought process as a society.  This won’t be an easy undertaking, but there are plenty of people, like Laurie, that are dedicating time, resources, and most importantly, organs to attempt to shift the paradigm.  What was I thinking before?

I started to realize that the journey that Laurie has started will be a long one.  She is on the list to become one of the growing numbers of selfless people that want to donate an organ just because it is the right thing to do.  There’s no prize or reward for what Laurie is doing, it is a purely selfless act that she hopes will help to effect change in our society.  Her goal of showing how easy and normal this can be is so important.  What a phenomenal cause to take part in!  As her spouse, friend, and business partner, I don’t know why I ever thought twice about her decision to become part of such a wonderful cause.  I was selfish and perhaps jealous of the cause that Laurie was dedicating time and energy to.  It was the easy thing for me to do- question the unknown.  It was easy to doubt this, and really difficult to support something that I previously put no effort into learning about.  This is the time when a spouse and friend need the full support of their friends, family and partners.  There is no time to question whether or not someone should so this… they need the support from family and friends from the onset of their decision.  This is journey that will be filled with plenty of unknowns and potential loneliness as there isn’t a huge community to seek support from- yet. This is a time for me to be there and show unconditional support for Laurie.  Any thoughts of making this about me have since gone.  Laurie’s passion and cause has become a part of OUR life, not just hers; I believe in this too.  Laurie is an inspiration to me and I now find myself wanting to do what she has chosen.  I believe in this cause and have been inspired by Laurie to also offer up a kidney if I am fortunate enough to qualify.

I have found that it is really easy to question or doubt the decision of a loved one to become a living donor.  Its easy because society has made it easy to doubt it and has made it easy to say “I’ll save my kidney in case mom needs it one day”.  What happens if mom (or other family member) never needs a kidney and you grow old and become unable to donate waiting for the perfect opportunity?  What happens then?  Did you make the right choice?  Why not help to change the way society thinks about this… why not strive to have living donors be the norm and not the abnormal?

I love going to Phish concerts with Laurie.  I picked this song because it means you don’t have to change yourself… just know who you are, and be true to you… and the greatest happiness you can find is when you’re just wasting your time with someone you love that realizes you aren’t going to give them anything fake. You are you… you don’t need to be anything else.