Organ donation and transplant rates are different in every country, and each country has its own set of challenges when it comes to problem solving for the unmet need for more organs.  There isn’t 1 country that has figured out the right combination of legal and ethical framework to create a self sustaining organ donation program that provides organs for their people as they become needed.  There are, however, some really effective policies and practices in place worth considering if we want to become a world leader in transplant and organ donation.

This blog post goes back and forth talking about living donation AND deceased donation.  As a reminder, deceased donation is when you agree to donate your organs AFTER death.  You can sign up to do that here, if you haven’t already.  LIVING donation is when you donate while you are still alive (what I am doing).  You can only do that with certain organs, like your kidney and liver.

Here are our world leaders, ranked as of 2015 for organ donation.  This combines living and deceased donors.

Here are the top performing countries in 2015 for Living Kidney Donation.  This excludes deceased donors, and liver donors both alive and deceased.

So what are they doing different than we are, and what can we learn from them?

95% of all deceased donations in Spain come from brain dead donors.  This implies that most potential deceased organ donors are cared for in an ICU.  ICU health care professionals include the conversation of organ donation in their end of life care more effectively than in other countries.

“If organ donation is not considered when people die under specific circumstances, potential donors will be missed.  The person fundamentally most capable of influencing the process will therefore be a clinician, primarily located in the ICU, who is able to establish an appropriate relationship with those working on the unit, promoting the idea of organ donation as a part of end-of-life care.”

Presumed Consent and an Educated Public

The great thing about this concept is that it captures those who are indifferent or complacent, and puts them in the YES category rather than the NO category. In the USA, the UK, and many other countries, there is a major disparity between the number of people who say that they believe in organ donation vs the number of people actually registered as an organ donor.  Why?  It takes an extra step, and it’s not important or something you think about doing until someone you know needs an organ.  Maybe it’s laziness.

There is a surprising drawback to presumed consent though!  The rate of live organ donations is lower in countries with opt-out systems.  What keeps well-intentioned people from opting in is something that academics, doctors, and organ-donation activists are trying to figure out.  There is a great article in the Atlantic if you are interested in learning more about the opt-in vs opt-out strategies.  Opt out has backfired, it actually has backfired in California recently, but if the public is educated it is proven to work in favor of producing more organ donors.

Israel didn’t make it onto the lists above, but they have employed a strategy that makes a lot of sense to me as someone who appreciates social order.  In Israel, if you are an organ donor, you get priority on the organ waiting list if you are signed up as an organ donor.  Those who have agreed to give their organs, get an organ before somebody who has not signed up to be a donor.  Those who opt in are rewarded, and those who do not opt in have to wait behind those who opted in.  This policy was nicknamed “dont give, don’t get.” Organ donation in Israel increased after this policy went into play in 2008.  It’s something to think about if you aren’t an organ donor right now!  If you one day need an organ, or your child or spouse needs one, you will want to draw from a system that you currently do not support.  Is that fair?

There have been some private organizations that have taken this concept and tried to apply it in countries that do not use this reward system.  There was one in the US called Lifeshareres.  Basically, you sign up to that group, and as a card carrying member, you are promising other members of the group that in the event you die, you promise that THEY get your organs first.  Vice versa- if you have joined the group and NEED an organ, the system is set up so that you would get a directed donation from someone in this group in the event that they die.  The website for this group was taken down in the past year, and despite the thousands of people signed up, it never actually worked out for anyone giving or receiving organs within the group.

Under the National Organ Transplant Act of 1984, paying somebody for organ donation is illegal in the United States.  In the 90’s Iran totally eliminated their kidney wait list by making the sale of organs legal.  This is a really interesting topic that starts an important conversation about the organ trade, and the black market that exploits the poor in many countries.  I am not going to argue the moral implications of this topic, but think it’s a great example of how incentives motivate people to do something as extreme as selling an organ.

Nineteen states currently provide tax incentives for organ donation.  Utah covers up to $10,000 of unreimbursed expenses (travel, lodging, lost wages, and medical expenses) associated with organ or tissue donation.  Four states provide tax credits to employers for wages paid to employees on leave for organ donation, and thirteen states have a tax deduction for up to $10,000 of unreimbursed costs.  There is not a federal law that requires an employer to give special time off for organ donors in the US, however many states do have special laws in place to protect their donors.  It is a great start, but does not compare to standards in other countries where donors are given greater financial incentive, and have fewer worries about the financial implications of donating due to the laws in place to protect them.

Sadly, one thing that is currently helping out the organ waitlist in the US is our heroin epidemic.  Right now, 1 in 11 organ donors is a drug-overdose victim.  With the epidemic growing, we can expect that these numbers will grow in favor of more people getting organs as a result of more people dying of a drug overdose. 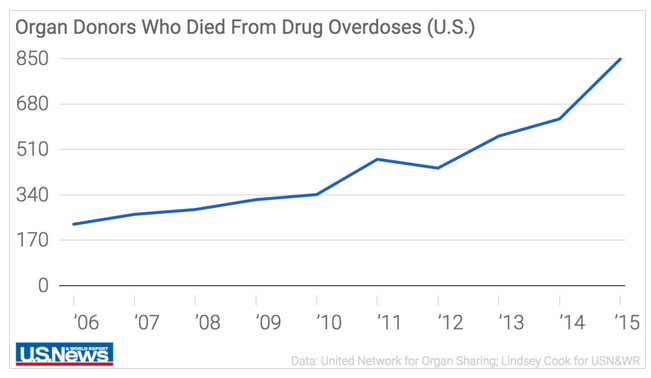 While I am not into football, I love a good Superbowl commercial, and have a huge appreciation for marketing stunts that WORK!  There have been several in the past few years related to organ donation, and they have done their job in getting more people to sign up to be donors.

Leo Burnett was behind this stunt in Brazil.  Not only did it bring the topic of organ donation into the media, but it resulted in thousands of people signing up to be organ donors in Brazil.  Way to go Brazil!

We can do a better job that we are doing.  There is a lot of work to do here, and we have the advantage of seeing what does and doesn’t work in other countries!  95% of Americans are in favor of being a donor but only 52% are registered.  So a simple call to action for YOU today.  If you believe in organ donation, make sure that you make that known.  Tell your loved ones, get on the organ donor registry, and be 1 less person in our country who wastes their organs because they didn’t take the time to register!

How Spain Became the World Leader in Organ Donation

Opt In Vs Opt Out Organ Donation

Why Don’t More People Want to Donate Their Organs?

3 thoughts on “Bury the Bentley!”